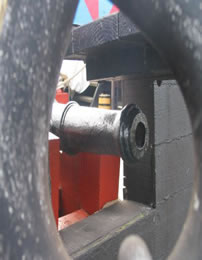 In 1588, eight years after Drake's triumphant circumnavigation, England and Spain formally went to war over religious and commercial differences, and in 1588 King Phillip 11 of Spain resolved to invade England. A huge fleet of Spanish and Portuguese ships were amassed and thousands of soldiers were sent to Flanders ready to invade.

The Spanish fleet, or Armada, was ordered to sail up the English Channel, and collect the army waiting at Calais and transport them across the Channel to Kent. If it proved impossible to invade Kent then it was suggested that they should try and capture the Isle of Wight instead.

News of the planned invasion reached England and a large fleet of English ships gathered at Plymouth, while the English army prepared their defences. Sir Francis Drake was Vice-Admiral to the fleet, some eight years after his famous circumnavigation.

The two fleets met off Plymouth on July 31st and a week long running battle took place as the fleets sailed up the channel. English gunnery was far superior to Spanish but the Armada adopted a well disciplined 'horseshoe' formation which proved impossible for the English to break. Thus, when the two fleets reached Calais they were both more or less intact. While the Armada waited for their army the English launched a deadly fireship attack. In the confusion many Spanish captains cut their anchor cables to escape and their formation was finally broken. The following day at the Battle of Gravelines the great Armada was beaten and the Spanish ships scattered to make their own way home .

By contrast not one English ship was lost during the campaign, and the great victory was celebrated across the country. The sailors on the ships did not fare so well and many of them died of disease and malnutrition in the weeks following the battle. The English admirals started a fund for the welfare of the seaman which may be regarded as the first naval pension.

The war lasted another seventeen years, and while Phillip 11 tried twice more to send invasion fleets against England, the events of 1588 had established England as a powerful nation at sea and had almost crippled Spain's maritime strength. Never again did England and her Navy face such a terrible threat as the 'Invincible Armada' of 1588.