In the Golden Hind, Sir Francis Drake's most famous ship, he became the first Englishman to circumnavigate the globe, on an epic expedition of discovery and adventure.

Drake had previously made a number of voyages to the Caribbean on trading missions and had carefully learned and recorded how to navigate around the West Indies on these previous travels.

Drake sailed between the five continents of Europe, Africa, North and South America and Asia, a journey taking him 1020 days. Five ships set sail in 1577 from Plymouth, the Golden Hind being the largest at 120 tons. Only the Hind completed the voyage and returned to Plymouth. The hardship endured in overcrowded and primive conditions was unbelievable with only 56 men returning with Drake three years after setting sail and 36,000 miles later.

The objective of Drake’s voyage (which was shrouded in secrecy) was to intercept the gold and jewels, which the Spanish were removing from South America (the Spanish ‘Main’) and shipping back to Spain across the Isthmus of Panama. In this Drake was spectacularly successful, capturing some twenty six tons of silver, half a ton of gold, thousands of coins, pieces of jewellery and jewels, emanating mainly from Peru and Bolivia - riches beyond his, and his backers' dreams. After intercepting his treasure off the coast of Peru, Drake could not set sail back along down South America because Spanish ships were awaiting his return. So, Drake proceeded north to California, onwards to Vancouver and then sailed over 1000 miles up to Alaska in an effort to return to England via the rumoured ‘North West Passage’ – an endeavour which it is alleged was at the specific request of Queen Elizabeth I, his voyage’s most important backer. Drake failed to find the Passage, which was not finally charted until some 250 years later, so he was left with no option but to sail west towards Japan. 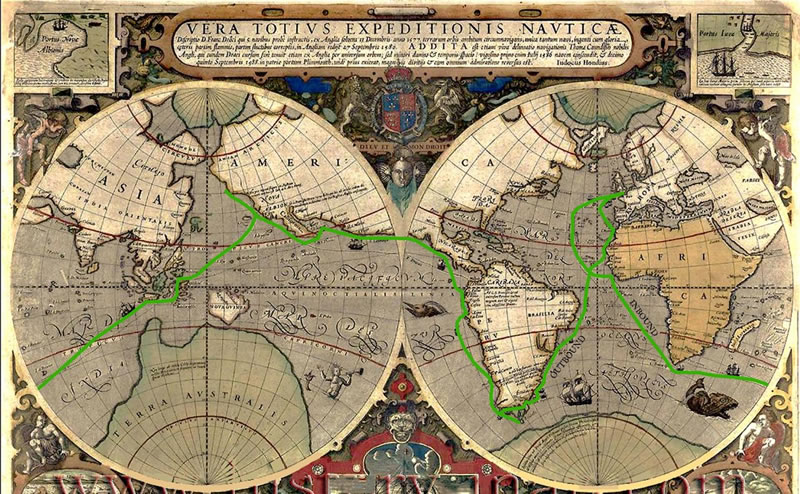 This route took the Golden Hind across the open Pacific Ocean, past the north coast of Australia and onto Indonesia and the Spice Islands, where he uploaded six tons of cloves, themselves worth their weight in gold at that time. From there the Golden Hind proceeded south-west past India, Madagascar and around the African continent via the Cape of Good Hope.

Long given up for dead, the Plymouth residents were amazed to see Drake and the small ship return into Plymouth Harbour in September 1580. Once Drake had been reassured that Queen Elizabeth I was still alive, he landed the Golden Hind full of treasure and jewels, at nearby Saltash, and in the process became one of the most famous men in the world. The total value of the items on board was 160,000 Elizabethan pounds, or almost half a billion pounds in today's money.

Queen Elizabeth's share alone was more than the England's annual national debt and was nicknamed 'El Draco' or 'The Dragon' by the Spanish by whom he continued to be both feared and reviled.

Drake was duly knighted onboard in Deptford, London. Come aboard and explore the ship that was home to Drake and his crew of 70. Come aboard and experience the sights, sounds and smells of life aboard a Tudor ship. Feel the romance of the seas in the great age of sail.

One of the Great Voyages

The journey remains one of the greatest voyages in history. On a ship barely 100 feet long, weighing 120 tons, with rudimentary navigational aids, Drake had sailed right around the globe and brought back almost unimaginable treasures.