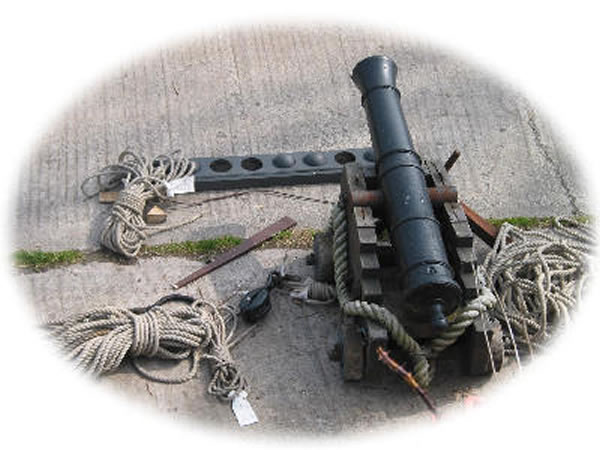 Tudor cannons came in many different sizes, from cannons firing a ball weighing 1 lb (0.45 kg) to ones firing a 48 lb (21.8 kg) ball. Different size cannons had different names such as minion, saker, and culverin. Whatever size a cannon was, it was loaded and fired in the same way. First a charge of gunpowder was placed in the muzzle (the opening at the mouth of the cannon) and pushed down to the breech (the back end of the barrel). Next a cannon ball was pushed down to sit in front of the gunpowder. Third, a wad of linen was pushed down after the ball to hold it all in place. Lastly a small amount of gunpowder was poured into a hole in the breech called a touch-hole. The gunpowder in the touch-hole was lit using a piece of smouldering match-cord, which then set off the main charge in the breech.

Above is a diagram of a loaded cannon, can you label the following parts correctly? Breech, Cannon Ball, Gunpowder, Muzzle, Touch-hole, Wad.